Profile: John and Leticia Davis Prepare for Security+ as a Couple

John Davis is an Army veteran turned IT professional, and Leticia Davis has worked in early childhood education for 20 years. The two have been married for almost three decades, and they are now looking to transition into the field of cybersecurity — as a couple.

When John and Leticia went to a PTAC class to learn about government contracting, they met Rim Technologies CEO Sara Kinney. It was a fortuitous time to meet: Rim Technologies has been offering a series of bootcamps this summer to help individuals pursue IT certifications such as Security+, CISSP, and CASP. The courses tie in with a scholarship program designed to help military spouses and dependents transition into a career in cybersecurity.

“We met Sara [Kinney] giving a class, and she later invited us to attend her Security+ bootcamp. And we were already studying for it, so it was perfect. She was gracious enough to let us attend and to help us with passing that exam. John has already passed the exam, and I’m scheduled to take mine July 17. So I’m studying like crazy,” Leticia said.

Leticia was offered a grant to continue pursuing her education while working at the Child Development Center at Pikes Peak Community College, which was what piqued her interest in changing career fields. She is currently pursuing a Masters degree in Management and Information Security and is set to graduate in October 2017. She said that meeting other women who already work in the field has been a great motivator for her as she studies.

“There are not a lot of women in cybersecurity,” Leticia said. “I know there’s a push for more women to join the field. Sara was inspirational for me – to make a career out of cybersecurity.”

John just passed the Security+ exam, and Leticia is set to take it next Monday. They have been working and studying together as a couple, pushing each other to succeed.

“Working with John – we’ve been married 28 years, so know each other pretty well,” Leticia said. “It’s kind of been neat because sometimes I can ask, ‘How does this work?’ I’ll force him to sit with me and help me out. And he is willing to do it – he said, ‘I’m going to help you out.'”

John, meanwhile, started his journey last year when he heard about a program with the VA that would help veterans get IT training. The program gave him access to an online course that offers a foundation in A+, Network+, and Security+, as well as vouchers for those who pass it. But it was his wife’s shared interest in the field that lead him to start working on it in earnest.

“I finished the online program last year, and I had a voucher but didn’t pursue it until recently when my wife got involved, and then it sparked a fire and we’ve been pursuing it ever since,” John said.

They have found their close relationship to be a major asset as they prepare for the exam.

“I found [studying with Leticia] to be very, very unique experience. I can truly say that if it had not been for her supporting me, actually introducing me back into this, I wouldn’t be where I’m at right now due to personal challenges I’ve had in my own life,” he said. “Without her stepping up and influencing me to get back into, to do this, and pushing me, I wouldn’t have done it. I have to give the credit to her for that. It was a unique experience, and I’m thankful to her. When I say she’s my better half, I’m not exaggerating. She is my better half, and I’m thankful for that.”

John has previous experience with IT, but cybersecurity is new territory for him.

“My background is that I served as IST [Information Systems Technology] lead with Bowhead Support Group a few years ago at an automated training facility at Fort Hunter Ligget in California,” John said. “I got introduced more to the IT field through a team of electronic positions – computer networks, switches, routers, SQL. That’s my background: in IT, not necessarily cybersecurity. I haven’t done this before, but the more I do it the more I find it interesting.”

Both John and Leticia are now looking for entry-level positions in cybersecurity as they make their transition into the field.

“As far as my interest goes – Security+, studying networks and ports and hardening – it’s mainly all theory in my brain,” Leticia said. “I would love to get into a job where I can get the hands-on practice and have it not just be all theory anymore.”

John agreed with her on the importance of getting practical experience.

“I have an IT background, but I need to get into an entry-level cybersecurity position,” John said. “Entry-level, hands on experience is paramount as I move forward in the career field. What I do in training needs to correlate to a career – I can find a job, but I’m looking at a career.”

The two are studying together this week as Leticia prepares for her Security+ exam on July 17. From there, they’ll be pursuing their career transition the same way they prepared for the exam: as a couple. 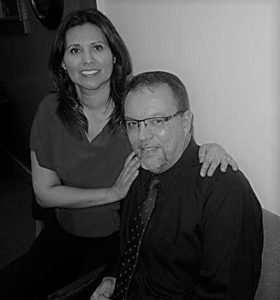